Hagos Gebrhiwet has quickly made a name for himself as one of the most promising Ethiopian talents in year - no easy feat considering Ethiopia’s status as a world leading in long distance running.

Hailing from Ethiopia’s northern Tigray Province, Hagos performed well in regional competitions to train with the Ethiopian National Team in Addis Ababa. In early 2011, Hagos placed sixth in Ethiopia’s National Championships over 5000m, a result that earned him a selection for the IAAF World Youth Championships in Lille, France. In his first major competition outside of Ethiopia, Hagos placed fifth in the final of the 3000m.

Encouraged by friend and training partner Dejen Gebremeskel, Hagos began to take a major step towards bettering his junior success in the senior ranks. He ended 2011 with a New Years Eve victory of 10 kilometers in Spain, and then, in 2012, made his Diamond League debut a memorable one, winning in Shanghai over 5000m, leaving reigning Olympic Champion and World Record holder Kenenisa Bekele in his wake. Weeks later, Hagos rewrote the age group records with his runner-up finish in Paris in 12:47.53, a world junior record by more than five seconds. An injury picked up after his fantastic run at Paris limited his performance at the London Olympic Games, where he finished 11th in the final of the 5000m.

Since his arrival to the senior circuit, Hagos has been one of the world’s top 5000m runners. He took the silver medal over 5000m at the 2013 IAAF World Championships in Moscow, and then won bronze at the 2015 IAAF World Championships in Beijing. Last year, after canceling his winter racing due to injury, Hagos qualified for the Rio Olympics, where he won the bronze medal. He ended 2016 ranked second in the world at 5000m. 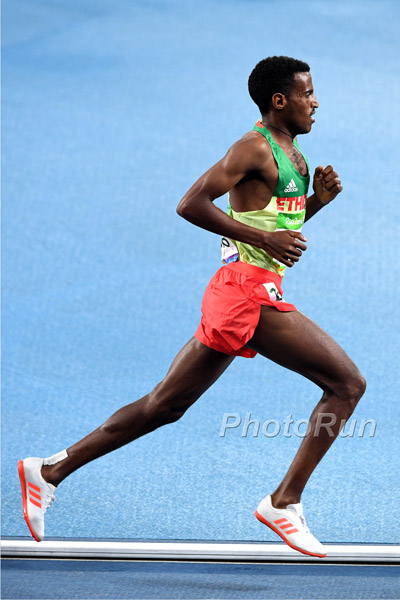